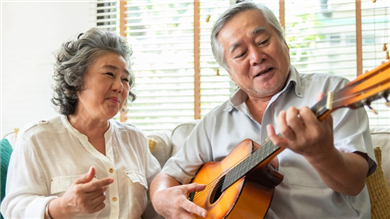 How Adults Benefit From Music

“We feel strongly that abundant health benefits can be achieved by older adults who learn to make music in a supportive, socially enjoyable setting. We are just beginning to understand the positive effects of making music on our bodies and our physical health.” - Dr. Frederick Tims, principal investigator for the Music Making And Wellness Research Project and professor and chair of Music Therapy at Michigan State University